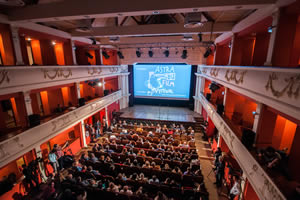 
Astra Film Festival is the promoter of the documentary movie and has brought the newest Romanian and international productions on the big screen ever since 1993. AFF is the festival that made the non-fiction movie popular in Romania and has brought current human realities into public debate.

At AFF Sibiu a space of encounters between filmmakers from all over the world is created, where problematics of transposing the reality on the screen through documentary movies are debated. It is the place of interactions between cinema professionals and an enthusiastic public. 1.400 movies from 90 countries were registered at the Astra Film Festival in 2014, of which 120 movies from 40 countries were selected for the official programme.

Astra Film Festival 2014 will have four competition sections. The section "International" gathers the most recent movies worldwide with the signatures of authors like Frederick Wiseman, Michel Gondry or Corneliu Porumboiu. The movies in the section "Central and Eastern Europe" approach topics which define the region’s identity and render realities that are sometimes unknown even among neighbouring countries. In the section entitled "Student", productions of young authors from the great academic centres in Geneva, Manchester, London, Munich, Budapest, Bucharest or San Antonio de los Banos (Cuba) enter the competition. The most recent Romanian productions, achieved over the past year, are screened in premiere within the section "Romania".

Beside the competition sections, a series of special programmes complete the 2014 edition programme of the Astra Film Festival.