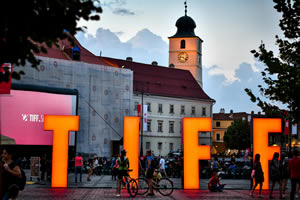 
The Transylvania International Film Festival, TIFF, the first feature film festival in Romania, was for the first time organised in Cluj in 2002 and in 2007 it was brought to Sibiu. Every year the festival had renowned guests, it presented film premieres, delighted the audience with original artists’ experiences and transformed Sibiu for a few days, into the cinema capital of the country.

As a festival dedicated to all seven arts, TIFF will use new locations in 2015. These locations will add to the value of the cinematographic picture as a whole, in addition to the already known event places: Piața Mare, Teatrul Gong, Cisnadioara Fortress and the ASTRA Open Air Museum.